Posted on 20 January 2012 by Cavershamragu

I begin the second stage of Bev’s 2012 Vintage Mystery Readers Challenge with an early mystery from the pen of Howard Fast, probably still best known as the author of Spartacus, his epic tale of revolution in ancient Rome. Like so many writers of liberal outlook during the 1940s and 50s, he was jailed and blacklisted during the McCarthy witch hunts and so published many commercially orientated thrillers under a variety of pseudonyms. Differently from the likes of Gore Vidal, Fast found that his pseudonymous work, especially as ‘E.V. Cunningham’, was extremely popular and continued in parallel with the more ‘serious’ output that he reserved for his own name. In the case of the 1971 TV-movie WHAT’S A NICE GIRL LIKE YOU, he wrote the screenplay as Fast adapting one of his Cunningham books (Shirley), so both names appeared on-screen.

His amnesia thriller Fallen Angel was originally published as by ‘Walter Ericson’ and later retitled Mirage as a tie-in to the 1965 film adaptation. The following post will look at both the book and the film and is thus split in two halves, just like our protagonist’s mind …

“… there we were in the middle of the twentieth century but as helpless and isolated as man had ever been at the beginning of the world.”

David Stillman works on the 22nd floor of a New York skyscraper as a cost accountant. One evening the lights in the building go out, encouraging some of the staff to give way to jollity and frivolity under the cover of darkness. But Stillman is a sober fellow and decides to walk down the stairs and make his way home instead. Ironically named, this is a man aware that he is stuck in a rut, unhappy with the way that the world seems to be going. His disenchantment is initially arrested during his descent when he meets a woman in the stairwell sporting a distinctive yellow scarf. He doesn’t remember her yet she speaks in a familiar way and seems to know who he is. As they walk down, she confides that the blackout is probably not a power failure but a plot by the mysterious ‘Vincent’. When they reach the ground floor she becomes angry when he claims not to know her and leaves via the stairs to the sub-basement. He goes out into the street to discover that a man fell to his death from the same building – in fact, from the same floor. After a drink at a bar across the street. with the lights now back on, he tries to find out who the girl was but to no avail. More disturbingly, he sees that the stairs they took don’t lead to a basement or anywhere else – so where did she go?

“I walked down four flights of stairs that were not there”

On his way home he learns that the apparent suicide victim was Charles Calvin, a hugely important figure in the world of atomic energy who was in the middle of writing a report for the American government – in fact it was so important he was writing it directly for the President! This does little to alleviate Stillman’s existential malaise as he thinks about the man plunging down towards his death. His gloom is aggravated further when he finds a gun-wielding stranger in his apartment. Apparently the mysterious ‘Vincent’ now wishes that the apparently insignificant accountant leave the country and move to Hungary behind the Iron Curtain – and he has sent a hired gun to ensure it happens.

Stillman manages to get away but realises that he is a marked man even though he has no idea why. Stillman’s growing sense of dissatisfaction and unease is not just a mid-life crisis but is rooted in something really sinister – the fact that he has a huge gap in his memory. He tries to see a psychiatrist fearing for his own sanity, but this turns into an unexpectedly hostile encounter. The symptoms that he eventually describes under questioning in fact are, he is told, a medical impossibility. Stillman has no friends at all, male or female, not even casual ones, and has no memory going any further back than three years before. He has apparently been an amnesiac for all these years, but without knowing it! He is left utterly shaken and alone.

“Everything began one morning when I woke up and answered an ad in the New York Times. Before that, there was nothing.”

Stillman, partly just to offset the terrible loneliness he now feels, eventually turns to private detective Caselle to try to find out who he really is and why somebody wants him out-of-the-way. The relationship with the detective becomes close almost immediately, the two finding  real kinship, not least because this is Caselle’s first case and he too is embarking on a new life. When they go back to the skyscraper, there is no evidence of Stillman’s office and none of the staff he knew are there. Caselle has doubts at first, but these are removed when he realises that they are being followed by one of 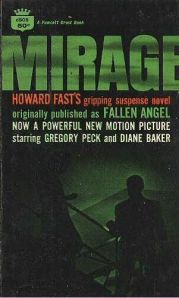 Vincent’s men. Stillman once again meets the mysterious woman, who it turns out also works for the powerful ‘Vincent’, but she refuses to help him regain his lost memory. He drags her to visit Joe Turtle, the doorman who used to work at his building, but it’s a trap – the man has been killed and the police called. They manage to hide out with Turtle’s neighbours, this interlude turning into one of many moments in which Fast comments on social inequalities, in this case spurred by the fact that the neighbours are black. This is a tense thriller with several chases and murders and is  breathlessly narrated in the first person, but Fast was also a writer with a strong social agenda and this comes through on almost every page as he comments on humanity’s endless pursuit of power and the perils of the atomic age.

Even though published under a pseudonym and unmistakably a genre product with a really solid mystery at its centre, it is also a book that is very typical of its author in its depiction of people thrust out of the mainstream and into no man’s land – as pointed out by Frank Campenni,

“… works of imprisoned martyrs, abounding in Christ-figures and symbolic Judases, reflect their author’s bitter sense of entrapment and isolation, for he could neither publish with established houses nor leave the country.”

Whatever name and title you find it published under, this is an above-average suspense yarn with a cracker jack plot (though a few stray elements are still left hanging at the end, it has to be said) and some strong characters tied together by a style that successfully conveys a really overpowering sense of paranoia. The social critique may make it seem a bit heavy in some respects but does help to distinguish it from many of the other similar books produced in the wake of the horrors of the second world war. In some respects it also deserves praise for the way that it precedes the work that Ross Macdonald would later produce about a decade later, applying deep social concerns to the structure of the mystery. The best way I can sum it up is as a real page-turner in the best sense of the word, even if its angst over the threat of imminent nuclear annihilation does seem to be a real remnant of the Cold War. It also inspired one very good movie (and one not so good one) …

The book had a convoluted publishing history that saw it being made available under a variety of guises over the years. Originally published in December 1951 (the release date though is generally given as 1952) by Little, Brown as Fallen Angel by ‘Walter Ericson’, it was reprinted by Ace the following year as ‘The Darkness Within’, still under the Ericson byline. Then in 1965 it was filmed as MIRAGE with the story attributed to Ericson on-screen; the book was promptly reprinted under that title but now under Fast’s own name. To muddy things further, in 1968 the movie was remade as JIGSAW, with Fast credited as the author of the original story, Peter Stone for his earlier screenplay adaptation for MIRAGE while the new screenwriter (Ranald MacDougall) hid his own name under a pseudonym …

The 1965 film MIRAGE is actually a very faithful adaptation of the novel, the screenplay by Stone making very few structural changes but mainly working to smarten up the dialogue and make the main character a bit more charismatic as befitting major star Gregory Peck. Stone had become a hot property after working on two major Cary Grant films for the same studio (Universal), the comedy FATHER GOOSE (1964), for which he shared an Oscar with Frank

Tarloff, and the Hitchockian comedy-thriller CHARADE, a minor classic. While Peck can’t really handle Stone’s witty banter as well as Grant he is great at suggesting the sheer angst and mounting frustration endured by the character as he tries to piece his life back together. The film is also a great example of very late Noir thanks to the impressive work of ace cinematographer Joe Macdonald and that of director Edward Dmytryk, who helped establish the genre at RKO in the 40s and who, ironically, and unlike Fast, did in fact ultimately ‘name names’ during the McCarthy hearings to get his career back. I have no idea what Fast thought about this, but one can speculate that he probably wasn’t too happy about it. Either way, it’s an excellent movie, highly atmospheric, and a very impressive adaptation too – it’s easily available as a region 1 DVD and all mystery fans should give it a whirl if they can as it is well worth the effort.

As part of the 2012 Vintage Mystery Readers Challenge, I plan on reading the following pre-1960 amnesia themed mysteries – but I am definitely open to further suggestions …