Posted on 13 November 2011 by Cavershamragu 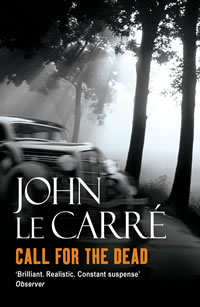 The recent film adaptation of Tinker, Tailor, Soldier, Spy by John le Carré, with its impressive rogues gallery of character actors and a mesmerising central turn by Gary Oldman as George Smiley, has re-ignited interest in the series of Cold War novels featuring the inveterate spymaster. One could argue that Tinker, Tailor is essentially a whodunnit set in the world espionage – even if not everyone agrees, to my mind there is certainly no denying that Smiley’s literary career began with two detective stories. It is 50 years since the publication of Call for the Dead, Smiley and le Carré’s debut, and it remains an impressive and under-regarded novel, and one that should be read first by anyone interested in the series. It opens with a long and detailed biographical sketch of Smiley – and his adventurous wife, Lady Ann.

“Loyalty to whom, to what?”

George Smiley works for the Circus, a section of the British Intelligence Service, and is called in to vet Samuel Arthur Fennan, a Civil Servant in the Foreign Office accused in an anonymous letter of having been a Communist during the 1930s while at university. The two go for a convivial walk in the park and Smiley ends the interview in the belief that the accusation is without merit and so clears him. The next morning Fennan is found dead by his own hand and the man’s wife, Elsa, blames Smiley for putting pressure on her husband. Smiley goes to interview Elsa, a Jewish

refugee who survived the horrors of the Concentration Camp to begin again in the UK but whose life is now once again in tatters. While at the house a call comes through from the telephone service to give Fennan an early morning wake-up call. The eponymous phone call proves to be a clue worthy of Columbo as Smiley, already unable to understand why the man might have killed himself after the interview went so well, becomes convinced that it must be murder – otherwise, why would Fennan have bothered to arrange a wake-up call?

Smiley’s boss, embarrassed by the claim that Fennan was driven to suicide by his section’s investigation, insists that the case be closed. Smiley gives his resignation and decides to investigate the case on his own time, enlisting the help of Inspector Mendel, who has now retired from the police force, to solve the case. Mendel is a character that will recur in later novels, including Tinker, Tailor as does Peter Guillam, who also makes his first appearance here.

They provide a lifeline outside of the Circus for Smiley and, when he gets too close to the truth and is attacked and left for dead, they are the ones who help keep the investigation on track while he spends weeks in hospital recuperating. The other main character who makes a more fleeting appearance is Hans-Dieter Mundt, who will play a crucial role in The Spy Who Came in from the Cold. Into the mix is added the unexpected visit of Smiley’s old protegé Dieter Frey, and it is at this point that the Smiley’s own personal life starts to get mixed up in the case.

This is a book full of fascinating contradictions. The owlish and rotund

Smiley, though an unlikely man of action, recovers from a beating so severe that it would have probably have finished off Mike Hammer and in the finale polishes off the villain of the piece in hand-to-hand combat. Equally, while seemingly a quiet intellectual and an unassuming Establishment figure, he is in many ways an outsider, ridiculed by the high-class friends and family of his aristocratic (and faithless) wife. And as he would do later in Tinker, Tailor, he is quickly at odds with his time-serving superiors and has to leave the Circus and work unofficially – this makes him much more attuned to

those who don’t fit in easily into the mainstream. This manifests itself here and in The Spy Who Came in from the Cold by making the stories partly hinge on characters who are victimised due to the anti-Semitic prejudices of others. This helps greatly in making Smiley and engrossing and compelling character even if we never fully penetrate his saturnine exterior and also reminds us that these are complex detective stories that also serve to question the apparatus of a state that can, in its anonymity, frequently display callous indifference to individual suffering.

The novels featuring George Smiley are as follows:

The book was filmed in 1966 as The Deadly Affair by Sidney Lumet with a faithful screenplay by Paul Dehn, who had worked previously on the film adaptation of The Spy Who Came in from the Cold (1965) and Goldfinger (1964) too. The main character was renamed Charles Dobbs and expertly played by James Mason while Simone Signoret steals the show (as she was wont to do) as Elsa. It also features a score by Quincy Jones, expertly grimy colour cinematography by the great Freddy Young and Harry Andrews should have got his own spin-off for his playing of Inspector Mendel. It is easy to get on DVD and well worth seeking out.

In addition to the film version, the novel was also the basis for a superb radio adaptation starring Simon Russel Beale as Smiley and which was broadcast as part of the ‘complete Smiley’ series. It is available on CD singly or as part of a box set containing adaptations of all the Smiley novels.

Call for the Dead makes for a compelling introduction to Smiley and the world of the ‘Circus’ and some of the recurring characters in the series – it also offers a well constructed and properly clued plot with a dynamic and emotionally satisfying climax. It also laid the foundation for probably the author’s best-known work from the 1960s, The Spy Who Came in from the Cold. If not the author’s best book, it is one that in some ways is probably more tightly plotted that the looser and more sprawling Tinker, Tailor and as such is a much better introduction to the world and characters of John le Carré.