THE MAHOGANY MURDERERS by Andy Lane

Posted on 6 November 2011 by Cavershamragu

A few years ago I started commuting – but British trains being what they frequently are (late, over-crowded, expensive …) I found that trying to read a book was not easy, what with all the jostling amongst passengers and the bumping of the rolling stock … so I got into audio. I’m not a fan of talking books, and for my listening pleasure prefer radio plays – which has made the work of the likes of the BBC and the Big Finish company a pretty essential part of my daily routine. So I thought I’d share a few of these sonic excursions – and have started with one of my favourites  …

The plot: Who is the mysterious Dr Tulp and what is his connection to the appearance of life-size wooden mannequins in the shape of hardened criminals from the London underworld?

This sixty-minute play features the return of theatre manager Henry Gordon Jago (Christopher Banjamin) and police pathologist Professor George Litefoot (Trevor Baxter), who made their sole TV appearance in Robert Holmes’ 1977 Victorian extravaganza, The Talons of Weng-Chiang. Seen by fans as among the best, if not the best, of Doctor Who stories, this was a six-part season finale that climaxed the first three years of Tom Baker’s tenure in the role, which had used many classic horror stories and conventions for inspiration throughout. Having already referenced the likes of Frankenstein and his monster, Jekyll & Hyde and the Mummy, this contribution by Holmes, also the show’s script editor, went for broke by combining pastiches of Sherlock Holmes, Phantom of the Opera, Fu Manchu and Jack the Ripper for a rip-snorting adventure in a fog-bound late 1890s London. 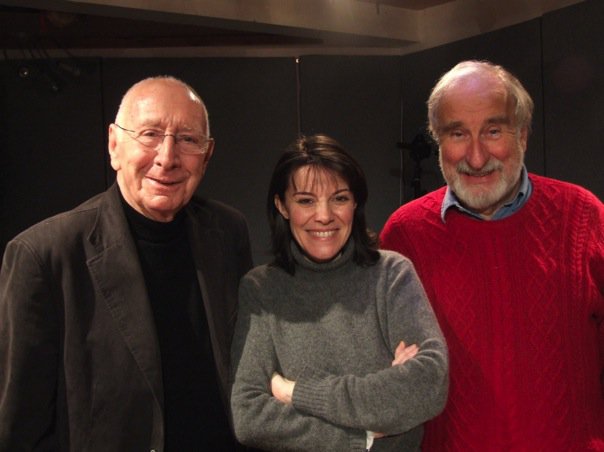 This new story by Andy Lane opens in a tavern after the end of a long and dramatic evening. It takes the form of one narrative told from two sometimes competing and overlapping points of view, with Jago and Litefoot telling their parts of the story over various libations as served by cockney barmaid Ellie (portrayed by Lisa Bowerman, probably best-known as Big Finish’s longest-lasting character, Bernice Summerfield, but who is also the play’s director). While the Companion Chronicles range to which this release belongs usually feature one character from the Doctor Who TV series and a supporting player, because this has three speaking parts and because the manner of the narrating of the story is so integral to one’s enjoyment, this tends to feel less like a speaking book and more like an intimate two-act play, which may partly account for its success. Thus we don’t get bogged down in descriptive prose or the kind of ‘he said’ and ‘she said’ type comments, which personally I find a distraction in audio. Here the duo are able to keep to their own voices and are aided by a superb sound design. Indeed, when Litefoot attempts to replicate others’ speech patterns and accents he is quickly admonished by Jago to leave acting to the professionals!

The two narrators continually interrupt each other and it is the dialectical nature of their discourse that makes this script really stand out, not because they are necessarily unreliable but rather for the way that they build on each while also seeming to try to out-do each other on occasions. Lane has great fun exploring both the excesses of Jago’s fruity and theatrical language and his elaborate use of alliteration and Litefoot’s comparative ignorance and naiveté amongst the lower classes and is greatly aided by his star performers. Benjamin and Baxter sound incredibly close to the way they did over 30 years ago and acquit themselves superbly. Benjamin proves especially good in providing a range of voices when describing his encounter with a gang of hardened criminals led by Jack Yeovil (a name familiar to fans of Kim Newman).

As the play begins we learn that Jago is sadly now out of work and so was glad to help the professor investigate the bizarre appearance of a remarkably lifelike wooden man in his mortuary, mistakenly brought to the morgue after being found near Southwark Bridge. Shortly afterwards the mysterious Dr Tulp appears demanding to have the mannequin back – this eventually leads the duo down to a warehouse full of electrical equipment. Lane interjects some postmodern humour as the strands of the story slowly converge and eventually bisect while the two men discuss the need to proceed in an orderly fashion so as to move from the story’s first ‘act’ to the second. The climax to part one in particular is wonderfully handled, with Jago desperate to build to a crescendo with his part of the story but having to concede that  when Litefoot recounts how the mannequin sat up and walked out of the morgue,

“You were right, your climactic moment was better.”

Although a few of the Chronicles have been released as double-length stories on two CDs, most notably Jacqueline Rayner’s ‘The Suffering’ and Nev Fountain’s wonderful Peri and the Piscon Paradox, they are usually about an hour in length and divided into two parts; consequently they can often feel a little a little abbreviated due to the time constraints. Mahogany Murderers is no different in this respect but this is not really much of a criticism as the plot, which is perfectly serviceable, is not really the main thing here – it works superbly well in its aim to re-introduce Holmes’ splendid and intrepid duo and their good humour and genuine affection for each other comes through very strongly. Thus when, at story’s end, parts of the narrative dealing with the criminal mastermind Dr Tulp are left open-ended this doesn’t feel like a let down but as a welcome door for further adventures, which has quickly come to fruition. The character and his story in fact was carried over and eventually completed in the subsequent stand-alone release, Jago & Litefoot, Series 1 – but that is a story for another day.

This review, in slightly different form, first appeared over at my Aficionado blog but I am now in the process of porting some of those reviews over to this site for ease of use. For my new page dedicated to the adventures of these Victorian gentlemen, see here.

For details on how to order the splendid rip-roaring Jago & Litefoot adventures, visit the Big Finish website at: www.bigfinish.com/Jago-and-Litefoot