IN CONVERSATION WITH AN ACID BATH MURDERER by Nigel Fairs

Posted on 15 October 2011 by Cavershamragu 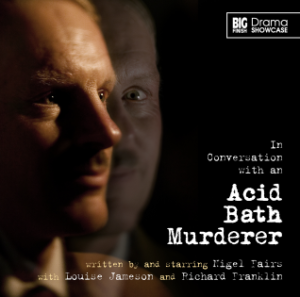 Synopsis: In 1949, John George Haigh, the infamous ‘Vampire killer’, was hanged for the murder of at least six people. Join him in the hangman’s cell as he tells you his story and invites you to relive the seduction, murder and disposal of three of his victims …

“What would a murderer be doing in Crawley of all places?”

This is the third in the new Drama Showcase range from Big Finish and is by their resident multi-hyphenate auteur Nigel Fairs (he acts, he writes, he directs, he composes, he does sound design …). He first performed his play as an one-man show but this version has been considerably expanded. It tells the frightening and intriguing story of John George Haigh – and is based on a notorious true-life case.

“Forgery was my forte.”

In the 1940s Haigh was convicted of the murder of several men and women even though their bodies were not recovered as he had in fact dissolved them in a bath of sulphuric acid, apparently in the mistaken belief that if there was no body then a conviction could never be made. He also claimed, apparently as part of an insanity plea, to drink the blood of his victims which led to his being labelled in the press as a ‘vampire killer’ – for more on this see the TruTV site.

Fairs shows considerably restrain in depicting this side of the story, which may come as a surprise / disappointment to some given the author’s pedigree in dealing with horror-tinged stories for his production for Doctor Who, The Tomorrow People and most especially Sapphire & Steel. This doesn’t stop it being extremely creepy and is enhanced by Fairs’ subtle but highly atmospheric sound design which helps take us in and out of Haigh’s mind as he recalls his life and crimes one rainy day. 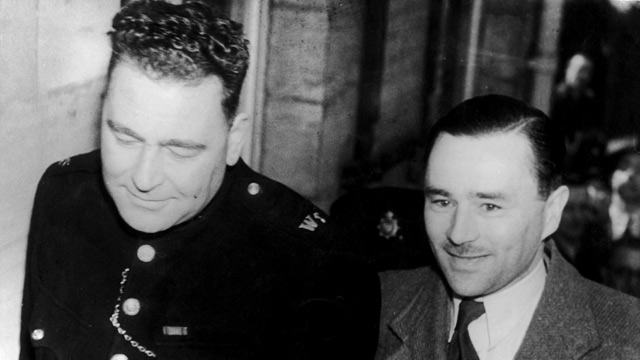 The 'real' John George Haigh after his arrest (image from: http://www.crimeandinvestigation.co.uk)

As I mentioned in my reviews for the previous dramas in this series, Not a Well Woman by Katy Manning and Pulling Faces starring Louise Jameson (who co-stars here and also directs this production), they have all adopted the confessional mode to more intimately explore the anxieties at the core of the lives of their central characters. As this play actually has the word ‘confession’ in the title one rightly expects more of the same though as it deals with a notorious real-life case the approach is a little different and of course, being set in the condemned cell shortly before execution, the word has a double meaning. In fact Fairs’ play is neatly bisected into two equal halves – before and after Haigh’s arrest. In the early parts we only get small hints of what the man was up to behind doors through reference to his unfortunate friend ‘George’, mainly concentrating instead on his fairly charming exterior as a businessman in Crawley, West Sussex in 1948. For the most part Fairs plays Haigh as a jovial and calm figure, giving no hint of the fatalism and religious fervour that seems to have been a large part of his psychological makeup. The play opens on New Year’s day 1948 with a mock newsreel story and then has Haigh provides a tour of his ‘workshop’ to an unidentified person

“My father wouldn’t allow a wireless set in the house. He called them the instruments of the devil.”

The second part plays a little bit like Kind Hearts and Coronets with Haigh in prison awaiting execution and working on his memoirs. There is much here that is queasy-making as we get a stronger sense of the carnage left behind by a sociopath who really couldn’t appreciate how horrible his crimes were.

Along with Fairs the small supporting cast acquits itself well – Doctor Who alumni Louise Jameson and Richard Franklin play two of his unfortunate victims though the best role is undoubtedly reserved for Haigh’s young and innocent girlfriend Margaret Richardson, played by Suzanne Proctor – their final meeting in Haigh’s cell is especially well done and brings this 60-minute play to a strong and emotionally powerful conclusion. But this is Fairs’ show all the way and he gives us a fascinating and compelling depiction of the kind of figure that inevitably engenders much atavistic attention and yet repels true understanding – this play walks a tight line between the two and is an intelligent take on very difficult material. It offers no great startling insights, and perhaps that is just as it should be – but it does give us a convincing portrait of a real yet perhaps inevitably unknowable personality, and thankfully eschews the temptation to just revel in the character’s apparent monstrousness – offering instead something much more complex, rewarding and troubling.

This CD also includes some 10 minutes of extras in the shape of interviews with the cast in which Fairs discusses his very personal reasons for being interested in this story and the weird coincidences and family connections linking him to the case. The discs ends on a jolly note when Proctor and the other interviewees descend into gales of laughter when she initially forgets her own character’s name. This audio production is well above average however and deserves to be remembered.