Posted on 20 August 2011 by Cavershamragu 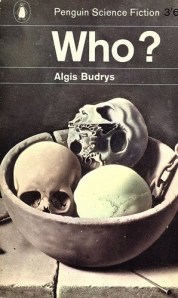 This is a Cold War espionage tale like no other. It begins in no man’s land on the border between East and West as one side prepares to return an enemy agent back to the other side. But things are not quite as they seem – in fact the man who is returned to the West may be an impostor. But this is not one of those spy stories we are used to in which plastic surgery is used to make one man look like another, or brainwashing has surreptitiously turned a  previously loyal agent into an enemy. Rather it’s the opposite, as doubt is immediately introduced as the man who comes back from behind the Iron Curtain is unrecognisable, his head and chest encased in metal.

“This world was never organised to include a faceless man.”

Algirdas Jonas Budrys was born in1931 in  East Prussia and from the age of five was brought up in the US, where his father worked as Consul General for Lithuania. His work is generally classified as Science Fiction though at various times he has used thriller and espionage tropes to explore political and existential themes, happily mixing genres as required. He would later say of himself:

“I have been called a Nazi, a Communist, a clod, a petit bourgeois, and a long-haired egghead. I am, in short, a child of the twentieth century.”

Who ?, his second novel, was first published in 1958 when Budrys was still in his twenties and to a certain extent can be seen to reflect his own unusual background in the way that it deals fairly equally with the Eastern and Western Blocs in its story of a man looking to establish his own identity. Set approximately 35 years in the future (that is to say, the early 1990s though no specific dates are given after 1968), the subject is Lucas Martino, an American scientist involved in an accident in his laboratory. The MacGuffin of this tale is K-Eighty-eight, something important that Martino has been developing for the Allies (America is now part of the ‘Allied Nations Government’) but which remains mysterious, right to the end of the story. In classic Hitchcock fashion, it is the search for this element that guides the actions of both East and West but is not in and of itself of any real importance.

Instead the focus is on Martino’s identity crisis. Shawn Rogers is the agent tasked with finding out if the man returned to the West actually is Martino so that the powers-that-be can decide whether or not to let him go back to work on the top-secret project. The lab was, curiously, very close to the border and after an explosion the Soviets got to Martino before the Allies did and have been hanging on to him for several months.

“They were caught up in a structure of circumstances that were each fitted to one another in an inevitable pattern, each so shaped that they fell naturally into a trackless maze, and there was nothing for anyone to do but follow along.”

They are able to keep him alive thanks to superior cybernetic technology but the head, chest and arm are largely artificial – the remaining arm is Martino’s alright, but has it been grafted on to someone else’s body? Today DNA testing makes a nonsense of this, inevitably, but this is not the point – as we alternate between the present as we follow Rogers’ increasingly fruitless investigation and the past, in which we follow Martino’s development through childhood up to his late teens as he formulates his earliest scientific ideas, we discover who the man was and how he saw the world and how this has changed. Martino conceives of the world along Cartesian lines, with everything with a single perfect place, but constantly fails to make his interaction with people follow the same logical pattern. This is contrasted with the Security Service’s attempts to use scientific means to either prove or disprove that the man they got back is who he says he is. Eventually, in a narrative that takes on the kind of ritualistic feel of a Paul Auster story from the New York Trilogy, years pass as the surveillance of Martino continues but is ultimately unable to either prove or disprove his real identity. The point of course is to discuss just how we measure these things, both when directing the gaze towards others but also more inwards – do we define ourselves through work, family, statehood and what happens to our own sense of self when these are seriously and dramatically challenged?

The mysteries set up by the plot are eventually all explained in the concluding section, albeit in quite a subtle fashion so readers will need to be fairly attentive to understand quite what has happened to Martino and why. Even though time and technology inevitably make the premise of the story dated, its investigation into what truly makes and defines a person is compellingly handled, especially in the moving section detailing Martino’s arrival in New York and his brief attempt to establish a connection with an old flame. 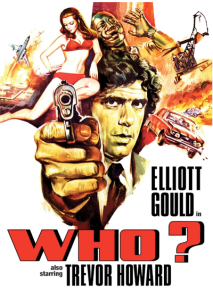 The book was adapted with rare fidelity and intelligence by director Jack Gold and screenwriter John Gould (who incidentally are two separate people despite what some sources might tell you) and the film was released, after some delay, in 1973. It stars Elliott Gould as Rogers and the great Trevor Howard as his Soviet nemesis, Azarin. Mostly shot in Germany but with some location filming in Florida, it follows the story very closely, right to its elliptically presented finish which provides a perfect ironic twist to the tale. For a detailed look at the film, which was recently made available on an excellent DVD with many informative extras, see the review by Glenn Erickson over at his DVD Savant site.

This most unusual and thoughtful of spy stories is a little gem.

This entry was posted in Espionage. Bookmark the permalink.