MURDER ON THE YELLOW BRICK ROAD (1977) by Stuart M. Kaminsky 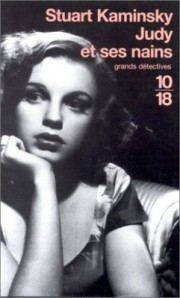 I love movies, especially those from the so-called Golden era (pre-1960) when the studios were seen as glamorous dream factories; and of course I love detective stories. Thus I am a real sucker for books that combine the two, when this is done successfully – sadly these can be quite few and far between. For my money, Stuart M. Kamisky was the best when it came to this particular mystery sub-genre. I briefly profiled his work in an early post on this blog, which you can read here, but this is my first review of one of his books. With his debut novel, Bullet for a Star (1976) Kamisky (also a film professor) pretty much launched the ‘Celebrity Sleuth’ genre with its winning combination of hardboiled detection, wry humour and celebrities from Hollywood’s Golden Age.

Over the decades there have been plenty of media stars who have dabbled in crime fiction publishing, though there is a recurring proviso as in the well-known case of actor George Sanders. At the time that he was best-known for portraying The Saint and The Falcon onscreen, he published two mystery novels, but in fact they were both ‘ghosted’ for him by Craig Rice and Leigh Brackett. Even the likes of actor George Kennedy, comedian Steve Allen and stripper Gypsy Rose Lee all appeared in crime novels that were published under their byline but all of which were ghost-written for them. 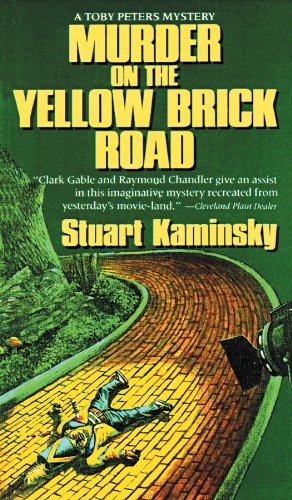 Alfred Hitchcock’s name and signature appeared on hundreds of anthologies, Young Adult books (as briefly discussed by me here) and of course his very own magazine. But all he did was license his name and likeness to a Florida businessman and then banked the regular cheques. Since the 80s celebrity ‘culture’ seems to have mandated that star names be attached as spinoffs to novels which are widely known to be actually written by others. The practice is now so commonplace as to be faintly absurd but the fact that readers at large know that the likes of William Shatner or Jordan (aka Katie Price) have not actually written the books published under their names doesn’t seem to discouraged the production of a small torrent of highly disposable fiction that would probably discourage any performer from genuinely trying to put pen to paper. Jon L. Breen wrote a highly amusing article on this here and Diane Plumley produced another one here.

What Kamisky popularised in his series featuring the underpaid and wisecracking private eye Toby Peters were stories set mainly in the 1940s Hollywood movie community in which actors, writers, producers, directors and other celebrities (later to include the likes of Albert Einstein and General MacArthur) became active characters within the well-researched fiction of the story. This approach has subsequently been taken up by such various authors as George Baxt (whose work I have been championing of late on this blog, with mixed results) and film critic David Thomson, who in Suspects created a postmodern hommage to Film Noir in a narrative almost entirely made up of the fictional characters from dozens of movies. But Kaminsky did it best, and longest  – and before the Broadway smash Wicked and the little seem Chevy Chase comedy Under the Rainbow (1981), he also tackled a fictional behind-the-scenes look at one of Hollywood’s most beloved children’s movies, MGM’s TechniColor extravaganza, The Wizard of Oz. 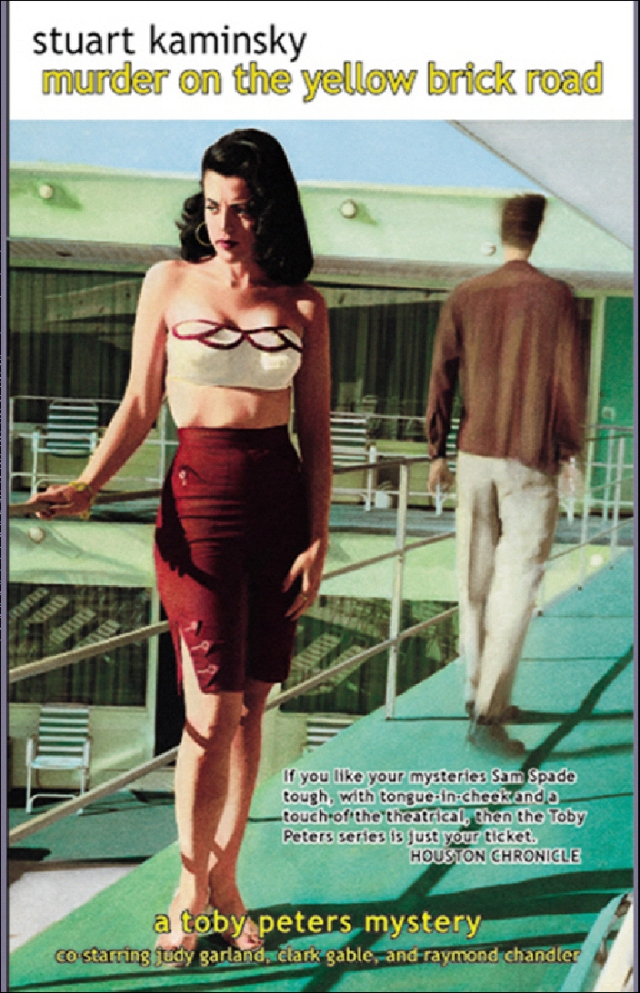 Bullet for a Star ended with Peters receiving an urgent phone call from Judy Garland. It’s 1940 and the diminutive star has just just discovered a munchkin stabbed to death at MGM on leftover sets from The Wizard of Oz. Instead of panicking, she sensibly called Peters, the ex-cop turned private eye who also used to work security over at Warner Bros. and who recently helped Errol Flynn out of a spot of bother. When MGM executives start piling on the pressure for him to accept the case, Toby is under no illusions – they only want his involvement because his brother Philip is a Lieutenant in the Homicide Department. The trouble is that his permanently angry brother hates the way he leads his low-rent life as a PI and regularly beats him up! At the insistence of MGM’s scarily powerful boss Louis B. Mayer, and out of sympathy with a scared Miss Garland, Peters accepts the job and goes about finding who the man dressed as a munchkin was, and who had a motive to kill him. Witnesses include Clark Gable, who in an amusing if not particularly illuminating chapter is interviewed at William Randolph Hearst’s colossal estate San Simeon, and director Victor Fleming who is much easier to find at the Brown Derby. This leads to a funny and, as it turns out, surprisingly pertinent, discussion about the textual analysis of movies, which of course would have been part of Kamisky’s daily job as a professor of film. Here though we have Fleming shooting down psychological interpretations of his movies:

“I had no such interpretation in mind when I made the movie and neither did anyone else who worked on it.”

Peters gets shot at many times and meets several celebrities along the way, including Raymond Chandler who is is loitering in a low-rent hotel picking up street slang and who proves eager to help out a real-life detective. Apart from various sympathetically and realistically drawn celebrities, the most important person Peters meets though is the man initially arrested by his brother for the crime, Gunther Werther, a Viennese refugee. Toby is able to get the charges against the man dropped and the two become firm friends. Gunther will become one of the mainstays of the series and along with dentist Sheldon Minck is pretty much the only friend Toby has.

“I fell asleep in a few minutes clutching my gun like a cold teddy bear.”

The plot is linear, the dialogue funny and as the celebrities are being shown in as realistic a fashion as possible, the line-up of potential suspects is actually pretty small as there are only a few prominent fictional characters in the story – so it isn’t too hard to figure out the culprit ahead of Toby. But the Hollywood atmosphere is well caught, star personalities are all rendered with great credibility and Kamisky’s fondness for his subject is never in doubt. Not the best of the Peters novels perhaps, but great fun all the same.

12 Responses to MURDER ON THE YELLOW BRICK ROAD (1977) by Stuart M. Kaminsky