The 2011 Alphabet of Crime community meme over at the Mysteries in Paradise blog has reached the end of the line with the letter Z – and my second and last nominations this week, comes following a communication from the author himself.

“The Vietnam Vet was the American Itch.” 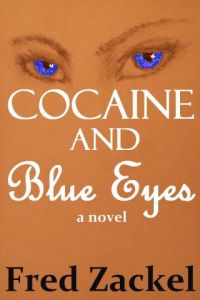 This is one of several novels from the 1970s that used the form and conventions of the private eye genre as developed by Hammett and Chandler to comment critically on the changes and disenchantment in American society wrought by the Vietnam War and the Watergate scandal. In common with Roger L. Simon’s The Big Fix, James Crumley’s The Last Good Kiss, the late Newton Thornburg’s Cutter and Bone and to a lesser extent the Spenser series by Robert B. Parker, these are contemporary hardboiled stories set in a world picking up the pieces after the tumultuous 1960s by refreshing and refining plots, characters and situations more familiar from the 30s and 40s. Cocaine and Blue Eyes fits right in with this pattern and was to a certain extent shepherded by Ross Macdonald, the last of the great classic triumvirate of the classic PI novelists.

“Fred Zackel’s first novel reminds me of the young Dashiell Hammett’s work, not because it is an imitation, but because it is not. It is a powerful and original book made from the lives and language of the people who live in San Francisco today.” – Ross Macdonald

In 1975 Frederick Zackel attended the Santa Barbara Writers Conference with the intention of quitting in his attempt, after several unsuccessful years, to become a published author. However he submitted a piece of writing that got the attention of novelist Ross Macdonald who would eventually serve as a mentor for what would become Cocaine and Blue Eyes (1978) after succumbing to the great author’s suggestion:

“Have you ever thought about doing something serious, like detective fiction?”

Set in San Francisco during Christmas and New Year, it features Michael Brennan, a private investigator fired from his large agency who now has to decide whether to go it alone or find a new line of work. Divorced with two young children, he helps Joey Crawford travel back to San Francisco on Christmas Day when the young man’s van breaks down. Joes is desperate to track down Dani Anatole, his girlfriend of several years who has dumped him and disappeared. Brennan refuses to take the case, but when the man sends him $1,000 in the post he changes his mind – not for the money but because in the interim Joes was killed in a car crash and he now wants to let Dani know what happened to her ex-boyfriend. It’s a classic piece of knight-errantry, a quest seeming to be without much obvious purpose but one through which our hero means to maintain his sense of honour, respect and to a certain extent sense of purpose in a world where values and even buildings are built perilously on shifting sands.

Dani it turns out is the scion of a powerful local family who has been trying to break free of the shackles that tie her financially to a complex trust fund, like her dypsomaniac sister Catherine and her shell-shocked Vietnam vet cousin, Jack. She has tried in various ways to escape the clutches of her dysfunctional family and now no one will tell Brennan where she is, convinced that he is hiding his real motives for trying to track her down. At a rudimentary level the novel can be seen as a sort of homage to Hammett, with its Northern California setting and its subplot of rival gangs being set up by the protagonist to play off each other, and Chandler, with particular reference to the latter Farewell, My Lovely. Like in that classic novel, the protagonist is hired, against his will, to find a long-lost girlfriend who had been a singer in a band but who is now in hiding. There is even a subplot regarding the theft of some Mandarin Jade, but this is just a gentle tipping of the hat to the past – the tone is much more modern, as are the language and situations, such as the clue that tells Brennan that maybe Dani hasn’t gone very far:

The book is full of knowing comments like that – if the 1970s milieu and slang don’t so much date as anchor the book to the 1970s, it is also clearly a work written by a young author, impressively finding his own voice though occasionally giving in too readily perhaps to the understandable temptation to provide some evidence of experience via some very sweeping generalisations (‘I’d seen sharp eyes like his before …’. ‘Like many old people …’, ‘Most women who wear black …’). These many sentences try to suggest a world-weariness that sometimes don’t quite match the zest and even innocence in the writing and which is a big part of the book’s charm. Along with loving descriptions of the weather and of life lived directly on the bay or near the water, there is also some great tough guy dialogue which shows that ear for the genre’s seemingly essential one-liners:

“She had a voice like a cat being sandpapered.”

As in the best of the Ross Macdonald books, the storyline which involves Chinese gangs and drug smuggling, eventually boils down to a convoluted pattern of family behaviour and hidden motives based on several skeletons in the closet. The result is a fine novel which can easily hold its head high amongst the great books published during the hardboiled renaissance of the 1970s and which keeps a particularly nasty little twist for the knockout 12-word chapter with which it concludes. Brennan would return, albeit battered and bruised, to fight another day in Cinderella After Midnight (1980). 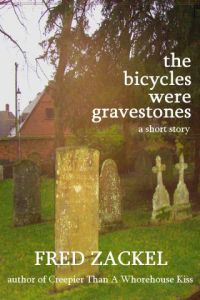 For more information about the author, you can read the brief biographical outline by Tom Nolan: www.smashwords.com/profile/view/fzackel

Zackel discusses his early meeting with Macdonald, and the circumstances surrounding the writing of his first novel, in a brief memoir published over at January Magazine, which you can read here: http://januarymagazine.com/features/zackel.html.

For a much more recent interview with Zackel, visit the item at Gutterbooks here in which he also discusses how he has embraced online publishing. The first chapter of Cocaine and Blue Eyes can be read online here at thrillingdetective.com while one of author’s short stories, ‘The Bicycles were Gravestones’, can be accessed here:www.storyglossia.com/28/fz_bicycles.html

This entry was posted in Private Eye, Ross Macdonald, San Francisco, Scene of the crime. Bookmark the permalink.