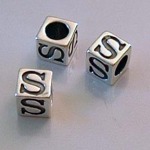 The Alphabet of Crime community meme over at the Mysteries in Paradise blog has reached the letter S. My second recommendation this week is …

Next month will see the return of Bill Pronzini’s ‘Nameless’ private eye in Camouflage, some 40 years since the publication of his first case. This will be the 38th volume in the series, one that, if publishers Macmillan are to be believed, will end when it reaches its 40th. 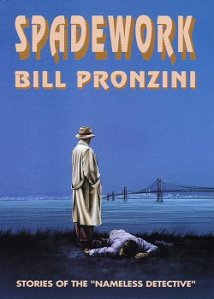 Fans will doubtless hope that this is not so, but if it is then this is a character that has already had an enviably long run – and a remarkably varied one at that. One shouldn’t need much of an excuse to celebrate the work of a master like Pronzini, but here, courtesy of the letter S, is a brief look at Spadework, his second collection of ‘Nameless’ short stories . It was originally published by Crippen & Landru in 1996, coinciding with the character’s 25th anniversary (where has the time gone?) but sadly now appears to be out of print. It contains fifteen short stories together with a delightfully biased introduction from fellow crime writer Marcia Muller, who is also Mr Pronzini’s wife.

‘Nameless’ does of course actually have a name – we just don’t know what it is, although we do have a pretty good idea. In one book his first name was actually given as ‘Bill’ and in a story in this collection, ‘One Night in Dolores Park’, we are wryly told that his surname sounds a bit like ‘Orenzi’ – but it’s not really important so let’s gloss over it as everybody else does, including, most importantly, his creator. When we first encountered him in 1971 he was a World War II vet but since then his ageing progress has been considerably delayed and his early history air-brushed out, as Pronzini himself notes in this collection’s afterword. At this stage he is approximately 55 years old, has successfully lost some of his middle-age spread thanks to the beneficial influence of his girlfriend Kerry and he is the partner in a private eye firm with another ex-cop, Eberhardt. He still collects pulp magazines and still keeps a gun under the dash of his car and lives and works in San Francisco.

The short stories included here, all told in the first person, provide a decent microcosm of Pronzini’s prodigious output (he is the author of dozens and dozens of novels, hundreds of short stories and has edited or co-edited a simply staggering number of anthologies). They range from the sour to the hilarious, from complex conundrums driven by hidden motives to the most callous and banal of crimes. ‘Souls Burning’ stands out in particular as a character study with a very nasty sting in the tale as our hero meets up with an old informant, leading to a particularly dyspeptic paragraph:

“A room with a view he’d said. Some view. Sitting here you could look down past Howard and up across Mission – almost two full blocks of the worst street in the city. It was so close you could hear the beat of its pulse, the ugly sounds of its living and its dying.”

There is also a strong melancholy feel to ‘Home is the Place Where’ and ‘Skeleton Rattle Your Mouldy Leg’, where Nameless solves two murder cases involving old men and the death of their children but ultimately decides not to tell the authorities what he found. In the case of the latter, ‘Nameless’ spends a lot of time with the elderly male residents of a run down motel and, in a small attack of panic, lists the number of reasons why this is not what will happen to him in his dotage. At the other end of the gerontological scale he also has to deal with two highly annoying children in ‘Zero Tolerance’, about a mugging at a Safeway supermarket, and the often hilarious and undignified ‘Here Comes Santa Claus’, which sees him catch a couple of pickpockets while playing Santa for a fundraiser organised by his girlfriend Kerry.

We also get treated to several of Pronzini’s trademark ‘locked room’ puzzles, including one (‘Cat’s Paw’) set in the lion house at a zoo, while in another gem, ‘Ace in the Hole’, our hero becomes an armchair detective and solves a wonderfully ingenious case without leaving the poker table. In another story, ‘Something Wrong’ its the actual armchair itself that could prove potentially lethal. One of the stories (‘Bomb Scare’) is told in less than 1,000 words while other longer titles have the space to be much more fleshed out in terms of plot and characterisation, though all the selections here are worthwhile and always provide good value. If you can find a copy, this is an excellent introduction to the many moods of Bill Pronzini’s venerable detective.

I plan to move on to some of Pronzini many fine novels soon and I am especially looking forward to re-reading his brilliantly orchestrated collaboration with Barry Malzberg,  The Running of Beasts. I would urge readers to sample the recent spate of reviews of some of Pronzini’s earlier works, especially Patrick’s detailed appraisal of several of the author’s best books, including one of my personal favourites, Hoodwink, for his At the Scene of the Crime blog (see here ) while over at his Detection by Moonlight blog the equally opinionated TomCat has with great skill dissected Shackles, a story that was something of a turning point in our hero’s career and potentially the reviewer’s too!

This entry was posted in Bill Pronzini, Crippen & Landru, Private Eye, San Francisco, Scene of the crime. Bookmark the permalink.