Posted on 7 March 2011 by Cavershamragu

The Alphabet of Crime community meme over at the Mysteries in Paradise blog this week reaches the letter I, my nomination is …

I’ve never been a particular fan of the modern legal thriller, despite a) being a confirmed mystery addict, b) loving courtroom dramas on TV and at the cinema and c) someone who got a law degree at university. What I really mean I suppose is that despite several notable examples of serious literary activity in the courtroom that I greatly admire – including important books by such authors as Charles Dickens, EM Forster, Harper Lee and Victor Hugo – I am not a fan of the genre as it has developed today through the efforts of the likes of John Grisham or Steve Martini, often finding them either too dry to engage with or too overblown to convince. But I know plenty of people who are thoroughly addicted to the genre and Scott Turow is always placed very near to the top of the heap.

Innocent is the latest in his long line of novels set as always in the fictional Kindle County and as usual it revisits some of the characters that drift in and out of all his novels. Before the story begins however readers have to make their way through a  somewhat unpromising introduction by the author which reads as though it has been insisted upon by the publishers to encourage reading groups (no bad thing in and of itself) and frankly feels a little bit forced. It maps out some of the major themes the text means to explore and establishes the author’s seriousness of intent, things that one would hope the book would be able to convey on its own without such blatant priming. It almost enough to make you forget that Turow is not a novice author putting out his shingle for the first time but in fact the author probably most responsible for making the legal thriller a blockbuster genre in the 1980s with the huge success if his first book, Presumed Innocent (1987). It is impossible not to think of that book as this is a sequel and thankfully Turow proves to have very little to be nervous about.

It open with a haunting image – a man is sitting on the corner of his bed, and in it is the dead body of his wife. Instead of that standby cliché of the hero waking up next to the corpse of an unknown beautiful blonde and wondering what happened, we know that the woman is the man’s wife and that the man is Rusty Sabich, the protagonists of Presumed Innocent almost a quarter of a century ago. The image evokes the Edward Hopper painting ‘Excursion into Philosophy’ (as Turow tells us in the introduction) and appropriately enough this is a mysterious and contemplative work, as much a whodunit and a story of existential malaise that can fairly be compared with Philip Roth’s recent investigations into the aging American male and his psyche.

Excursion into Philosophy (1959) by Edward Hopper

Rusty is now sixty, a senior appellate court judge and suddenly a widower. He will spend almost the next 24 hours sitting by his late wife on the bed their shared before calling their son Nat about her death. He probably knows what has taken place and caused her death, but if his past is anything to go by, then he probably won’t be telling – at least, not anytime soon. As with its predecessor, it is the relationship between Rusty and his wife Barbara that is at the is core of the novel, but with Nat providing a crucial new dimension to the dynamic.

After this prologue the story then jumps backward and forwards over an 18 month period, the shifts helpfully signposted by a small diagram of the timeline at the top of each chapter to tell us where we are (this would be even more helpful if the dates hadn’t been left in the US style of month-day-year however) as we shift from one character’s viewpoint to another. While the earlier novel was also seen from Rusty’s point of view, here Turow employs multiple narrators with great skill to take the reader into the minds of the other main characters – these include prosecutor Tommy Molto, an ex-colleague who prosecuted Rusty at his trial, and who here is greatly humanised as we see him find a new lease on life following a late but successful marriage and the birth of his child; and Anna, an intern in her 30s who after several romantic disasters develops a huge crush on Rusty. During the first half of the book we slowly learn what has happened to Rusty after the events in Presumed Innocent, during which he was put on trial for the murder of his colleague Carolyn, who at one-time had also been his mistress. In terms of straightforward narrative we are told all we need to know about the character’s history from that story and it not necessary to have actually read the preceding novel – however, by the time the book ends, not having access to this information will put some readers at a certain disadvantage, even if they do not realise it, in terms of truly appreciating the several ironies of the story. 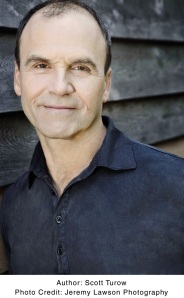 Rusty is now running for election to the Supreme Court, to the increasing distress of Barbara who has now been diagnosed with bipolar disorder along with a number of congenital ailments ad who can feel her life being ever more exposed as Rusty pulls further away from her. The scenes in which we see her descend into a black and violent rage is particularly effective, as are the scenes in which Rusty, feeling increasingly distanced from his wife, begins an affair with Anna – all of which will come to haunt him when Tommy decides to prosecute Rusty for the murder of his wife in what appears to be an act driven by spite and bitter rivalry since there seems to be little evidence that Barbara dies anything other than a natural death. Most readers are bound to roll their eyes as Rusty seemingly falls into the same traps he did decades earlier, but this time the love affair is much more genuine and is well and truly over before Barbara’s death. What it does though is provide much more insight into the mind of a man now late in middle age who has come to realise that he made a mistake by renouncing on the possibility of a happier domestic life for the sake or giving his son a more stable environment. This part of the story is handled in a sensitive and heartfelt manner and one can only guess at how much of this was inspired from the real-life separation that Turow and his now ex-wife were going through at the time the book was being prepared.

The second part of the novel deals almost exclusively with the trial and is paced quite different, with suspense paradoxically increased by bringing the tempo almost to a complete stop  – having covered some 18 months in the previous half of the book, the next 100 or so pages deal exclusively with just one day in court – the contrast is truly galvanizing and expertly handled by Turow. In addition he brings back wily defence lawyer Sandy Stern, who also defended Rusty the first time round but who now also has his own battle with cancer to contend with. The courtroom pyrotechnics are handled with great finesse as a mountain of minute circumstantial detail is accumulated against Rusty while his private life is thrown into even further chaos when his ex-mistress Anna falls in love with Nat. If this sounds a little soap operatic, to a certain extent it is, but the high level of attention paid to the detailed charactarisation easily matches that given over to legal maneuverings so at to make all aspects of the novel equally compelling.

Several surprises and twists follow leading to a logical and satisfying conclusion that, if not offering the stunning revelation at the end of Presumed Innocent, does build on it in an ingenious and utterly seductive fashion. I was utterly captivated by this novel and found myself reading it at top speed, its 500 pages just sailing by. Highly recommended, even to those not partial to the legal thriller genre because once it gets its tenterhooks in to you it just won’t let go.

This entry was posted in Crime Fiction Alphabet, Scott Turow. Bookmark the permalink.