Posted on 28 February 2011 by Cavershamragu

The Alphabet of Crime community meme over at the Mysteries in Paradise blog this week reaches the letter H, so I nominate …

And so begins the first in a series of three brisk novels (and one short story) featuring the East End of London’s answer to Philip Marlowe, Sam Spade and the Continental Op. It’s a great opening line, but not really that representative of the tone of the book as a whole, or of the lead character either come to that.

Hazell is 33, recently divorced, a recovering alcoholic and late of the Metropolitan Police Force (following a severe beating from a vicious gang of thieves who virtually destroyed his ankle). After hitting skid row (or the East End of London’s equivalent) he is trying to put his life back together as a private inquiry agent. Although undeniably tough (and emotionally immature) he is also far from being a total cynic – he has a lot more in common say with Ross Macdonald’ Lew Archer (featured in last week’s post) than cro-magnum PI’s like Mike Hammer and with considerably more humour than either. 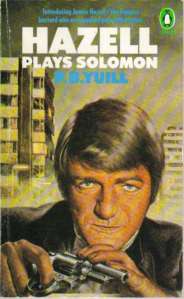 The book tells a good story well but is perhaps most notable for the fact that it is peppered with cockney slang and abounds with colourful detail about life in the British capital circa 1974, when there was a full-blown oil crisis, the world economy was in turmoil, there was unrest in the Middle East and the country was gripped by a deep depression – sound familiar?

Hazell is hired to do a locate a woman who had a child some six years earlier at a hospital in Bethnal Green. He quickly finds housewife Toni Abrey living in a rundown estate and is immediately attracted to her unusually long knees. Her husband Cliff is currently on strike from the factory where he is a semi-skilled machinist and he is the one who really dotes on their daughter Patricia, who is about to celebrate her sixth birthday. Hazell is quickly smitten with Toni (and truly captivated by her knees, surely a first in literary sexual peccadilloes) and soon they are sleeping together.

It is only when he is really involved with her that Hazell discovers the true implications of his job. His boss is Gordon Gregory, a sharp upper-class lawyer (“he was thinner than a pound note at a slimming farm”) with ‘Venables, Venables, Williams and Gregory’, a sly reference to the names behind the Yuill pseudonym: football manager Terry Venables and novelist Gordon Williams. Gregory is acting on behalf of a rich woman from California who also gave birth to a baby girl at the same hospital six years before – and who believes that the two babies were swapped. It’s a simple plot, and was a fairly original one for its time but one that is also treated seriously, considering the devastation that is going to be caused by any outcome beyond leaving things as they are, which is James’ preferred solution. He usually ignores the more heart-rending sides of his cases but is soon berated by his Mum and even Dot, his landlady and occasional employer, for his lack of feeling, and eventually the case starts to gnaw at him. What also give the story its edge is the way that is used to explore the class divide, James’ humble origins invariably getting thrown in his face as his loyalties between his powerful aristocratic employer, who knows that this truly is James’ last chance to make a career for himself, and the lower class Abrey family, who for all their manifest faults have none of the hypocrisy of those that would try to take their child. 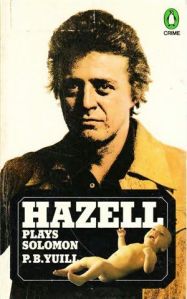 Hazell’s life is complicated further with visits from unsympathetic ex CID colleague ‘Choc’ Minty, who wants a spy in Gregory’s office, and Keith O’Rourke, a villain he helped put away who is now fresh out of jail and looking for revenge on James and his slightly crooked father. The book though is dominated by Georgina Gunning, the East End girl who made good and went to live the good life in America as the wife of a record producer only to discover, through a blood test following a car accident, that her daughter Helen is in fact not her flesh and blood after all. A haughty and difficult woman (“tighter with words than a Paris waiter with change”), the depths of her troubled emotional state only really emerge at the end of the novel, which has several surprises in store.

The books were successfully adapted for TV as Hazell (ITV, 1978-80), with Venables and Williams contributing to the scripts and plot strands filleted from the novels used to make one-hour episodes.

The books are short, zesty and well-plotted and very easy to find second-hand – you’d be a mug not to try one!